ava
Control Ultimate Edition on PS5 brings out the full potential of the game with faster loading times, a new 60fps performance mode, and a ray tracing graphics mode.

Control: Ultimate Edition takes the already excellent storytelling of 2019's Control and brings it to next-gen tech on Xbox Series X|S and PlayStation 5. And it just looks so good. But you don't need to just take our word for it, you can check it out for yourself.

In the video above, we showcase how Control on PS4 compares with Control: Ultimate Edition on PS5. We first test the game's loading speeds, putting Control on both base PS4 and PS4 Pro up against the Ultimate Edition on PS5. After that, we dive into some side-by-side gameplay comparisons. Don't worry, if you've yet to play Control, you won't find any major spoilers here. We just go through the first 20 minutes of the game's campaign.

In GameSpot's Control review, Peter Brown writes, "It's not often that a game invades my thoughts the way Control has. I'm at the point where I want to consume every last thing it has to offer. And if I'm honest, it also makes me want to go back and replay Remedy's past games, too. Sure, it's a faulty metroidvania in some respects, but there are so many exceptional qualities afoot that Control handily deflects any momentary ire."

On top of that, Phil Hornshaw adds that the Ultimate Edition, with "its graphical add-ons, the stability and performance enhancements, and the inclusion of all of Control's DLC," is "the best way to experience Control--and the PS5's haptics really add an extra layer of intensity to a game that already feels great to play." 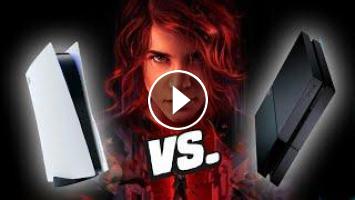 Control Ultimate Edition on PS5 brings out the full potential of the game with faster loading times, a new 60fps performance mode, and a ray tracing g...