Shang-Chi: The Full Story of the MCU’s Mandarin

ava
Marvel's The Mandarin has had a convoluted history from terror mastermind to international bogeyman and, most recently, as the virtually immortal leader of the criminal organization in Marvel's newest hit, Shang-Chi and the Legend of the Ten Rings. Yes, this character has been around in some form or another since the very start of the MCU.

But it's been a confusing and winding road for The Mandarin, a.k.a. Wenwu, so let's trace his path from the beginning...

In 2008's Iron Man, a faction of the terrorist group the Ten Rings is behind the abduction of Tony Stark in Afghanistan. We learn later in the film that it was Stark's partner and mentor Obadiah Stane who engineered the entire thing, but it was the Ten Rings who carried it out. By Iron Man 3, a Mandarin imposter known as Trevor Slattery (Ben Kingsley) also entered the fray, all under the control of Guy Pearce's Aldrich Killian - who seemed to be the real "Mandarin" working behind the scenes.

But now, in Shang-Chi and the Legend of the Ten Rings, Tony Leung's Xu Wenwu is revealed to be the head of a shadowy international network dating back to the Middle Ages. The Mandarin is just one of the names given to him over the centuries...

Watch the video for the full story of the MCU's Mandarin and how he has evolved over the years!

Shang-Chi: The Full Story of the MCU’s Mandarin 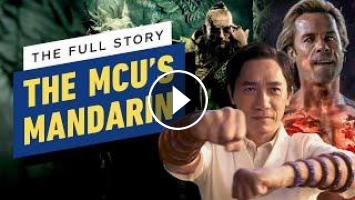 Marvel's The Mandarin has had a convoluted history from terror mastermind to international bogeyman and, most recently, as the virtually immortal lead...