Star Wars: Knights of the Old Republic is a role-playing video game set in the Star Wars universe. Developed by BioWare and published by LucasArts, the game was released for the Xbox on July 15, 2003, and for Microsoft Windows on November 19, 2003. The game was later ported to Mac OS X, iOS, and Android by Aspyr, and it is playable on the Xbox 360 and Xbox One via their respective backwards-compatibility features.

The story of Knights of the Old Republic takes place almost 4000 years before the formation of the Galactic Empire, where Darth Malak, a Dark Lord of the Sith, has unleashed a Sith armada against the Republic. The player character, as a Jedi, must venture to different planets in the galaxy in order to defeat Malak. Players choose from three character classes and customize their characters at the beginning of the game, and engage in round-based combat against enemies. Through interacting with other characters and making plot decisions, the alignment system will determine whether the player's character aligns with the light or dark side of the Force.

The game was directed by Casey Hudson, designed by James Ohlen, and written by Drew Karpyshyn. LucasArts proposed developing a game tied to Star Wars: Episode II – Attack of the Clones, or a game set thousands of years before the prequels. The team chose the latter as they thought that they would have more creative freedom. Ed Asner, Ethan Phillips, and Jennifer Hale were hired to perform voices for the game's characters, while the soundtrack was composed by Jeremy Soule. Announced in 2000, the game was delayed several times before its release in July 2003.

The game received critical acclaim upon release, with critics applauding the game's characters, story, and sound. It was nominated for numerous awards, and is considered one of the best games ever made. A sequel, Star Wars: Knights of the Old Republic II – The Sith Lords, developed by Obsidian Entertainment at BioWare's suggestion, was released in 2004. The series' story continued with the 2011 release of Star Wars: The Old Republic, a MMORPG developed by BioWare. 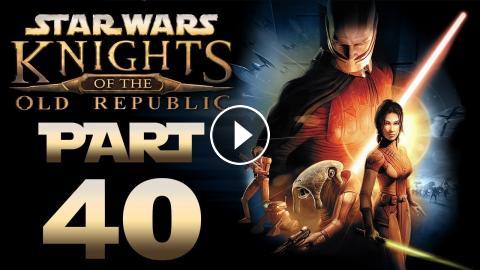