ava
I figured we should have a look at Flashing lights again as they just released another update. Here's is the full changelog

New (updates for the New map)
- Dispatch multiplayer support
- Dispatch support multiple calls at same time within department
- CAD update to join/leave missions in active calls tab
- Calls now end after timeout if no players responding
- New Dumpster Fire calls for Fire Department [ID 2001]
- New garbage dumpster models around the city
- Bus stop models around the city
- Power Off button on every screen in vehicle computer
- Mission complete UI pop-up now show when the call is cleared, but do not issue any points. Points are now given for player actions in missions only
- Another suspect registration added at the back entrance of Police Station


Thank you for watching, please don't forget to like, and comment if you feel inclined to do so.

About TheNorthernAlex
On this channel, you will find mainly simulator games like Flight Simulator, X-Plane X, Farming Simulator, Construction Simulator, Euro Truck Simulator and all kinds of games related to Emergency services like Emergency 4, 911 First Responders, and Emergency 2016. Everything related to Firefighters, Police, and Emergency Medical Services. 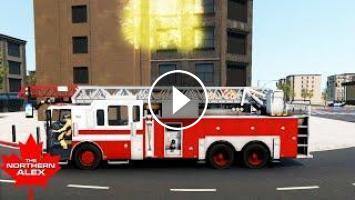 I figured we should have a look at Flashing lights again as they just released another update. Here's is the full changelog Build 260121-2 [Unstable] ...