112 Views
admin
Sponsored Content: The Halo universe has changed a lot since the first game, so if you’re one of the crew of the UNSC Spirit of Fire, and you’ve been in cryosleep since the end of Halo Wars 1, you’re bound to have missed some stuff. Don’t worry, though, we’re here to get you up to speed. Consider the following Haloverse-changing moments, in this video brought to you by Outside Xbox and sponsor Halo Wars 2!

While humanity and the Covenant had had minor meetings before, their first major diplomatic meeting took place on the UEG colony world of Harvest. Things seemed to be going well until an overexcited unggoy attacked a colonial militia recruit and then everything kicked off, kind of like closing time at your local bar, only with intergalactic consequences.

Consequences like Master Chief riding a Covenant bomb through space and using it to destroy one of the Covenant's own enormous capital ships, another moment on our list.

It’s just like that bit in Doctor Strangelove, except you can tell it’s a Covenant bomb because it’s all purple and pointy, and all Covenant weapons look like they were designed by Mattel. Guaranteed, the hottest gift of Christmas 2558 is going to be the Needler. 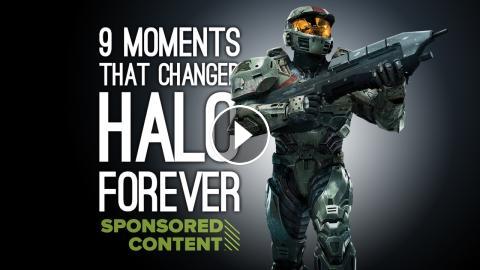 Sponsored Content: The Halo universe has changed a lot since the first game, so if you’re one of the crew of the UNSC Spirit of Fire, and you’ve been ...