Battlefield 2042 Trailer - Everything You Missed

ava
Battlefield 2042 has a release date, a new class system, increased player count, massive maps, upcoming alphas, and more. Let’s break down the reveal trailer and point out where each of these changes can be seen.

Battlefield 2042 (previously referred to as Battlefield 6) is the next confirmed entry in EA's big shooter franchise. The game takes place in the near future and makes some major changes to the series. Maps will be larger than previous games, the player count has been raised to 128 on next-gen platforms and PC. Conquest mode is getting a makeover with Sectors full of objectives to fight over causing matches to go between moments of calm and huge forces colliding in one place. 2042 will not have massive destruction but it will include the return of Levolution, ground deformation, and extreme weather events including sandstorms and tornadoes. 2042 will also sport a revamped class system that uses ten Specialists in the place of the classic Engineer, Recon, Support, and Assault classes. Specialists are fully voiced and each has a unique gadget and ability.

In this video, we’re going to take a look at the reveal trailer which is not actual gameplay but shows off the game’s maps, Specialists, vehicles, and mechanics. We’re taking you through frame by frame so that you have a full understanding ahead of the Gameplay Reveal on June 13th at E3 2021.

Battlefield 2042 will have a technical playtest in early July with more announcements at EA Play Live on July 22nd. And the totally not battle-royale mode Hazard Zone will be in alpha pre-launch, followed by an open beta at a later date. Battlefield 2042 releases on October 22nd, 2021 for PC, PlayStation 5, PS4, Xbox Series X/S, and Xbox One.

Battlefield 2042 Trailer - Everything You Missed 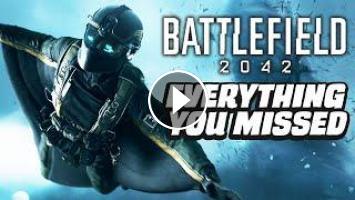