ava
The Last Chance Qualifier is over, and the World Championship Finals stage is set! Aphelion eSports earned the Golden Ticket on Day 1 of the event, and Tribe Gaming clinched the year’s final Golden Ticket on Day 2. In the Last Chance Qualifier, unique strategies demonstrated the personalities of each competing team, and Wildcard teams from community events showed their might by reaching the finals on both days of competition. Now, Tribe Gaming and Aphelion eSports make their final preparations for the biggest Clash of Clans Esports event of the year: the World Championship Finals from December 3-5! While we say goodbye to many great teams in the Last Chance Qualifier, we also applaud their achievements with these great highlights from the competition!

Save the World Championship 2021 playlist: https://www.youtube.com/playlist?list=PLGhzmQmduiLenOL5-MJMtLORmzi96Kmku 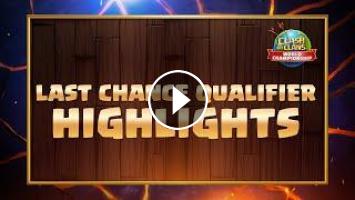 The Last Chance Qualifier is over, and the World Championship Finals stage is set! Aphelion eSports earned the Golden Ticket on Day 1 of the event, an...