120 Views
admin
Control is the new game from Remedy, the studio behind Quantum Break and Alan Wake, and it’s shaping up to be just as twisted and unsettling as those earlier games. Fresh from the new Control trailer and a demo of Control gameplay here at E3 2018, we’re here to share the seven freakiest things we saw in Control, because if we can’t sleep at night anymore, we don’t see why you should either. Subscribe for more on Control and from E3 2018, why not?

Control takes place in a modern world a bit like our own, only spookier and more sci-fi, and the leather jackets are better. The protagonist is one Jesse Faden, who works for an agency called the Federal Bureau of Control.

This bureau investigates and researches spooky and arcane goings-on, like the FBI if it was all Mulders and no Scullys.

The good news for Jesse Faden is her career is on the up and up, because at this point in the game she’s the new director of the bureau.

The less good news is that a malevolent supernatural force known as the Hiss has infiltrated and corrupted the bureau, which has done a number on FBC headquarters here.

The bureau HQ is called the Oldest House, and is even more ominous than its name suggests, being a vast, logic-defying, non-euclidean space, such as Cthulhu might take his summer vacation in.

And the freakiness doesn't end there, nor with the sinister refrigerator that must always be watched, the shadowy projection of the bureau's previous director, or the arcane rituals that must be performed to navigate the mysterious Oldest House.

This place must be an absolute nightmare to work in. You try being on time for a meeting when the conference room has phased out of existence.

Remedy comes out on an unspecified release date in 2019 on PC, PS4 and Xbox One. 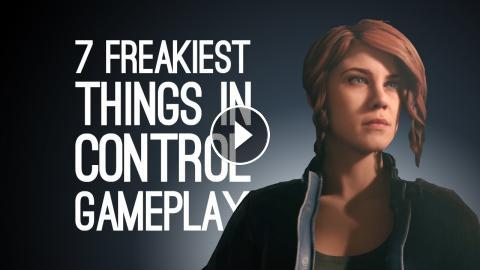 Control is the new game from Remedy, the studio behind Quantum Break and Alan Wake, and it’s shaping up to be just as twisted and unsettling as those ...