▼ A new "Musou" drawn in an "open world" ▼
In this work, there are various things such as "main mission" that greatly progresses the story of the era when the operation warlords are active by capturing, "mission" that affects the main mission, "request" from various people, etc. Innumerable missions occur in various places.
The situation changes from moment to moment depending on the player's choice.
Furthermore, even in battles of various sizes that occur in various parts of the continent, various strategies such as "breaking through from the front", "surprise attack from a high place", "infiltrate alone at night" are possible, and the magnificent "Sangokushi" You can enjoy the world of 100 people by playing 100 people.

▼ More refreshing and more versatile! Renewed "Musou Action" ▼
This work is equipped with a new action "State Combo System" that allows you to move around freely according to the surrounding conditions, while maintaining the easy operation unique to the "Musou" series.
It is composed mainly of three, "flow attack" that changes according to the state of the enemy, "react attack" that changes depending on the situation between the player and the enemy, and "trigger attack" that changes the state of the enemy, and is the best in the series. You can experience the level of "Ikki Tousen's exhilaration".
In addition, we have adopted "interactive actions" that enable you to take actions according to the terrain and environment. In addition to climbing mountains and swimming across rivers, there are various options depending on the situation, such as "climbing a wall with a grappling hook" and "exploding an oil jar with a fire arrow to attack an enemy". The choice of actions expands the range of strategies. 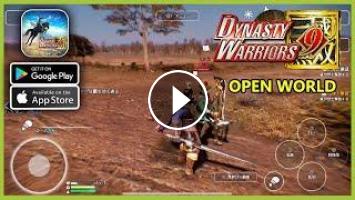