Ghostbusters: The Video Game is a 2009 action-adventure game based on the Ghostbusters media franchise. Terminal Reality developed the Windows, PlayStation 3, and Xbox 360 versions, while Red Fly Studio developed the PlayStation 2, PlayStation Portable, and Wii versions. The game was released after several delays in development and multiple publisher changes. In North America, all versions of the game were published by Atari, while publishing in Europe for the PlayStation 2, PlayStation Portable and PlayStation 3 versions was handled by Sony Computer Entertainment. A separate game for the Nintendo DS developed by Zen Studios with the same title was also released at the same time, albeit with substantial differences in gameplay and story.

The game follows the player's character as a new recruit in the Ghostbusters, a team of parapsychologists who pursue and capture ghosts. The game features elements of typical third-person shooters, but instead of using a traditional gun, players are equipped with a "Proton Pack", a laser beam-like weapon, and a ghost trap to fight and capture ghosts. The game's plot is set two years after Ghostbusters II, around Thanksgiving in 1991, with the Ghostbusters team training the player's character while investigating paranormal activities in New York City.

Many of the principal cast members from the films were involved in the game's production. Each of the actors who portrayed the Ghostbusters in the films (Dan Aykroyd, Harold Ramis, Bill Murray, and Ernie Hudson) lent their voices and likenesses to the in-game characters. Aykroyd and Ramis, who wrote the films, also aided in script doctoring for the game. Other film cast members such as William Atherton, Brian Doyle-Murray, and Annie Potts lent their voices and likenesses to the game's characters as well. Max von Sydow also reprised the voice of Vigo the Carpathian. Ghostbusters: The Video Game also contains the soundtrack from the original Ghostbusters film along with various characters, locations, and props featured in the films. The game received generally favorable reviews from critics and more than one million copies were sold. A remastered version for Microsoft Windows, Nintendo Switch, PlayStation 4, and Xbox One is being developed by Saber Interactive and is scheduled for release on October 4, 2019. 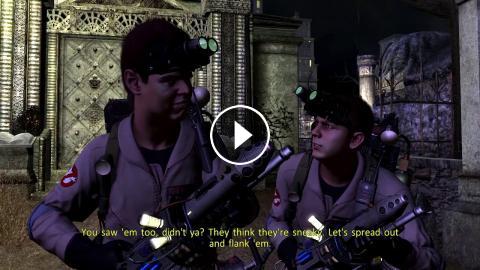