ava
On today's IGN The Fix: Games, Sony has acquired UK developer Firesprite, marking the third studio acquisition from Sony this year alone. As noted on the PlayStation Blog, Firesprite has worked closely with Sony, creating several titles together. Most notably, the developer helped to create The Playroom and The Playroom VR. Firesprite is also the developer behind The Persistence, a horror shooter originally released on the PS4 as a PSVR title before becoming a non-VR version on PS4, Xbox One, Switch, and PC two years later. It's been one year since Marvel's Avengers hit the scene, and developer Crystal Dynamics released a new road map for the rest of 2021. With details for the first raid, a power level cap increase, and, of course, confirming again that Spider-Man is slated to come to PlayStation later this year. In an extensive new blog, Crystal Dynamics looks back at the year, including all the ups and downs, as well as looks towards the future providing a glimpse at some upcoming content. Diablo 2: Resurrected won't feature ultrawide monitor support when it launches on September 23 due to the discovery that the wider screens break AI mechanics within the original game. Following the technical beta for Diablo 2: Resurrected, developer Vicarious Visions and Blizzard Entertainment took to updating fans on a number of in-game features that the team has revisited. Stella has all that in your Daily Fix! 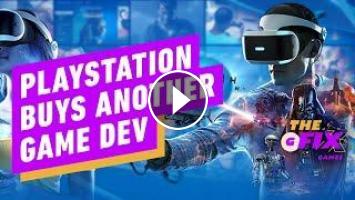 On today's IGN The Fix: Games, Sony has acquired UK developer Firesprite, marking the third studio acquisition from Sony this year alone. As noted on ...