CHASE STARLIGHT
In Skyfall Chasers, everyone is fighting over Starlight, the most valuable resource in the galaxy which is extracted from special meteors. You play as a member of The Chasers, key players in the lucrative Starlight black market who risk it all to collect it from lawless frontiers.

UNLOCK AND CUSTOMIZE
There are no in-app purchases, we guarantee a fair experience to everyone.
Rise through the ranks of our free battle pass to unlock new Chasers to play with, each with their own unique abilities and personalities, as well as awesome hero and weapon skins.

MADE FOR MOBILE
This game features optimized UI and customizable controls built for a streamlined mobile FPS experience.

MANY PATHS TO VICTORY:
Your goal is to hit a target score of Starlight, but how you win is up to you!
You can collect Starlight by exploring the map and scavenging it from crates and breakable objects, or go in guns blazing and steal it from your defeated rivals.
If you get defeated, you won’t have to wait for the next game, you’ll dive right back into the action to get your revenge. You’ll always have a fighting chance.
If you don’t want your Starlight to get stolen, you can secure it in machines called TRANSFER BAYS scattered throughout the map. But you’ll be vulnerable while you deposit your payload, so watch your back.
SKYFALLS are deadly meteor showers that pummel the map but leave behind lots of Starlight. It’s a high risk-high reward event, and only the bravest dare enter the storm. 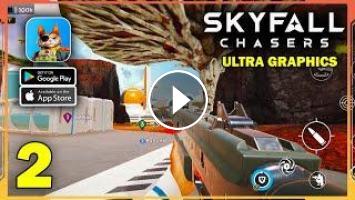