ava
Take a look at our comparison between "Prioritize Graphics (4K resolution)" and "Prioritize Framerate (around 1620p)" modes in Tales of Arise on PlayStation 5!

Tales of Arise is a beautiful game, but on next-gen hardware, you get the choice to either prioritize graphics (targeting 4K resolution) or prioritize framerate (targeting around 1620p). We ran through a few different areas and engaged in combat in several areas, as well as captured gameplay of several cutscenes. There are quite a few moments where both modes look very similar, but some of the busier areas, especially those with high detail, like trees and leaves, bog down the Prioritize Graphics Mode a bit. In any case, the game looks great on PS5, however you decide to play it! 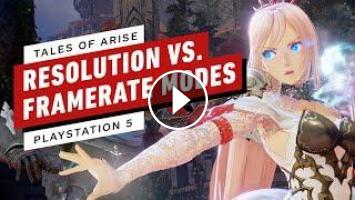 Take a look at our comparison between "Prioritize Graphics (4K resolution)" and "Prioritize Framerate (around 1620p)" modes in Tal...