What You Need To Know - Modern Warfare 2 Multiplayer

ava
Call of Duty: Modern Warfare II has made big changes to guns, movement, throwables, and perks. Let’s give you the knowledge to slay in the open beta.

Call of Duty: Modern Warfare II brings a lot of new changes to Call of Duty, and you can see them in the open beta. In this video, we’re going to dive into what’s new with movement, perks, gadgets and grenades, gun customization, third-person mode, and quality of life.

Overall, Infinity Ward has delivered fantastic map design with multiple lanes and climbing routes. To get through those spaces quickly, it’s time for you to learn what you can and can’t dolphin dive over and how wall-hanging and peeking works. Spoilers, you can even shoot over the top of walls while hanging.

Perks have had an overhaul and now come in packages, which means players don’t have to choose between specialists and killstreaks the way they did in Modern Warfare 2019. We have a few recommended builds for you in order to self-revive and quickly regenerate lethal and tactical items.

In the gadgets and grenades territory, it’s time for you to learn how to use drill charges, which can go through floors, ceilings, and walls. We’ll have a look at shock sticks and their uses to build space and prevent enemies from pushing you. We’ll also have a look at seemingly Rainbow Six Siege-inspired gadgets like cameras and mobile barricades. Then we’ll mess around with the hilarious and maybe not very useful decoy dummy, which still has a few surprises you might not know about.

Guns and progression have been revamped for better or worse and the Gunsmith menu now sees players unlocking categories of attachments and guns with the ability to swap out receivers and make Franken-guns. Although this system allows for more variety and less time spent unlocking attachments for every gun, it also comes with confusing menus, so we’ll explain how it works. For example, you might need to grind kills with a battle rifle to get a submachine gun. We can also show you how to cheese standard loadout classes to unlock the Lachmann-556 until that gets patched.

Finally, we’ll have a look at new quality-of-life changes, like an FOV slider on base consoles, as well as varied and fantastic attention to detail on character animations. The Call of Duty: Modern Warfare 2 beta runs September 22-23 on Xbox Series X|S, Xbox One, PlayStation 4, PS5, and PC for players who pre-order the game,  and then for everyone September 24-26. The open beta period should finally include Battle Maps with modes such as Ground War. Modern Warfare 2 releases on October 28, with Warzone 2.0 releasing on November 16.

What You Need To Know - Modern Warfare 2 Multiplayer 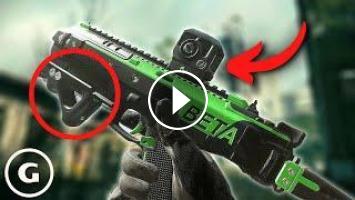 Call of Duty: Modern Warfare II has made big changes to guns, movement, throwables, and perks. Let’s give you the knowledge to slay in the open beta. ...