ava
We recently got hands-on time with a preview build of Aliens: Fireteam Elite. You're watching a three-player co-op from the first mission of the second campaign.

Aliens: Fireteam Elite is a new co-op action shooter set within the legendary Alien franchise. As a loose sequel to the 1986 film, this game sees colonial marines face off against xenomorphs and other hostile foes that pull on deep threads of Alien lore. We recently got some hands-on time with the game, playing through the first half of the game's campaign, and we saw just harrowing encounters can get when running and gunning through space stations and ancient tombs filled with xenomorphs and hostile synthetic soldiers.

In this new gameplay video, we play through the first mission of chapter 2, taking place on a planet that was once under control by the ancient Engineers--the mysterious alien race from the 2012 film Prometheus. Our squad of marines not only came face to face against xenomorphs but also saw some of the more surprising story turns in the game's campaign. As a squad-based shooter, you and two other players will be able to play as marines with different class types and weapon loadouts. Our squad used the gunner class to lay in fast damage in this gameplay, the demolisher class to tear through enemies with a high-powered smart flamethrower, and the tactician class to lay down support turrets. Fireteam Elite pays some hearty tribute to the Alien franchise, particularly the 1986 film, and it also lays the groundwork for what comes next. We're excited to see more of the game, and what's to come in the rest of the campaign. 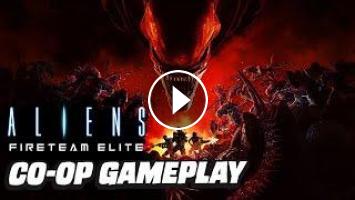 We recently got hands-on time with a preview build of Aliens: Fireteam Elite. You're watching a three-player co-op from the first mission of the secon...