Control is an action-adventure video game developed by Remedy Entertainment and published by 505 Games. The game revolves around the Federal Bureau of Control (FBC), a secret U.S. government agency tasked with containing and studying phenomena which violate the laws of reality. As Jesse Faden, the Bureau's new Director, players explore the Oldest House – the FBC's paranormal New York headquarters – and utilize powerful abilities in order to defeat a deadly enemy known only as the Hiss, which has invaded and corrupted reality. Control is set to be released on August 27, 2019 for Microsoft Windows, PlayStation 4 Pro, and Xbox One X.

Jesse Faden arrives at the Federal Bureau of Control in search of her younger brother, Dylan, who was kidnapped by the Bureau in their childhood after a supernatural event occurred in their hometown of Ordinary. Arriving at the Oldest House, the FBC's supernatural headquarters, Jesse finds it under attack by a hostile force known only as "the Hiss," which possesses the FBC's agents and corrupts the building. After Zachariah Trench, the Bureau's Director, is killed mysteriously, Jesse is unexpectedly deemed to be the new Director after she is chosen to wield the Service Weapon, a supernatural Object of Power which determines the Bureau's leadership. Wielding a host of supernatural powers, Jesse is tasked with defeating the Hiss and restoring order to the Oldest House. Along the way, she locates the scattered surviving agents of the FBC, including Research Specialist Emily Pope, Security Chief Simon Arish, Head of Research Casper Darling, Head of Operations Helen Marshall, and Head of Security Salvador.

Like Remedy's previous projects, Control is played from a third-person perspective, and is built using Remedy's proprietary Northlight Engine, which was first used on the company's previous title Quantum Break. As Jesse Faden, players wield the Service Weapon, a supernatural firearm that can be adapted into a variety of different forms with different combat applications. In addition to the Service Weapon, Jesse also possesses a variety of supernatural abilities, including telekinesis, levitation, and the ability to control certain enemies. The Service Weapon and Jesse's abilities both expend Jesse's energy, necessitating a balance in their usage. The Service Weapon can be upgraded throughout the game via a skill tree; in order to gain new powers, players must locate various Objects of Power - ordinary items acted upon by supernatural forces - hidden throughout the Oldest House. Due to the versatility of the game's loadouts, Control's combat system can be customized and balanced to each player's personal preferences. Health in Control does not recharge automatically, and must be picked up from fallen enemies. 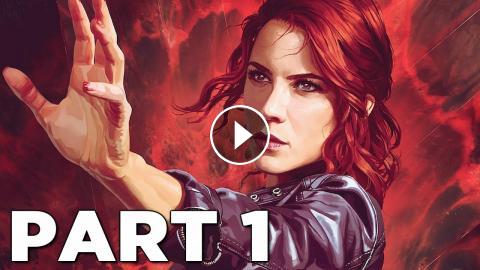