ava
Adorably frosty, and frostily furry-ous, the Yeti is a brand new Troop that unlocks at Town Hall 12 when you upgrade your Barracks.
It lumbers towards its targets and packs a mighty punch in those paws. But on its back, the Yeti carries a basket of Yetimites that it cares for in the cold peaks of the mountains. When the Yeti takes damage, its Yetimite friends will hop from their cozy wicker sanctuary and seek retribution. When the Yeti’s Hit Points reach zero, the remaining Yetimites break free and will swarm the enemy as they perform untold acts of mischief like hopping over Walls to deal damage or leave everyone’s shoelaces untied. 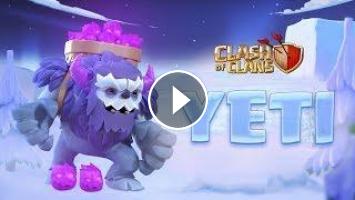 Adorably frosty, and frostily furry-ous, the Yeti is a brand new Troop that unlocks at Town Hall 12 when you upgrade your Barracks. It lumbers towards...